Novomatic corruption: how white is the vest really?

For many years, Novomatic has been associated with possible corruption in various cases. Anyone who deals intensively with the past 20 years of gaming history in Austria will notice two specific words in a regular context, namely Novomatic and corruption. Sometimes it was about alleged hidden party financing, sometimes about the presumed influence on the legislation.

In the newest case, the appointment of Peter Sidlos to the CASAG board is even about an alleged dirty deal between the FPÖ and the manufacturer of the Novoline slot machines. Anyone who goes on a search for traces in this long period of time will notice the same names that appear in allegations and court cases and form nodes in the gigantic network of advisors, acquaintances and lobbyists. Novomatic has won many battles in connection with allegations of corruption in the past, but how white is the vest of the Austrian flagship company?

The latest cause of Novomatic and corruption is similar to 2006

In Austria, it is not exactly easy for gaming companies to gain a foothold in the state-insulated market. Casinos Austria AG towers above everything, which has a more than lucrative monopoly in both online casinos and casinos. In addition, there is even the cash cow par excellence through Austrian Lotteries, whose sales are in the billions. In the current affair about Novomatic and corruption, there is accusation that the slot machine manufacturer Peter Sidlo brought in the CASAG for the FPÖ in order to receive a license for online casinos. Interestingly, this is not the first time that this context, Internet license against favors for a political party, has been suspected and claimed.

As early as 2006, Novomatic is said to have made a major effort through lobbyists to redraft the gaming law. According to the investigations by the economic and corruption prosecutor’s office at the time, the aim was to break CASAG’s monopoly. Due to the influence on politics, not only should an online casino license open new markets for Novomatic, but also an entry into the lucrative lottery was planned. As an important partner, the Novoline slot machine manufacturer had a heavyweight in the Austrian economy with Telekom Austria. In future, the ruble should roll together in gaming in sectors that were previously reserved for CASAG alone.

As the WKStA suspected at the time, Novomatic is said to have paid 100,000 euros to the then finance minister Karl-Heinz Grasser in 2006 to secure his help with the planned new gambling law. In addition to the ex-finance minister, the then CEO of Novomatic, Franz Wohlfahrt, and the well-known lobbyist Walter Meischberger, who will appear even more often, were involved at the time. In addition to the allegation of bribery, there were also bogus bills and illegal party financing. The investigation into Novomatic and corruption in this case lasted around seven years from 2010 to 2017 and ended with the termination of the investigation.

No criminal action could be proven for all involved

What was interesting about the termination of the investigation against Novomatic in 2017 was that the WKStA did not consider it necessary at the time to publish an official statement about the founders of the termination. According to the addendum, Wolfgang Brandstetter was the Minister of Justice at the time and had the highest authority to issue instructions. Interestingly, he was previously a defense lawyer for Franz Wohlfahrt, the CEO of Novomatic, and even represented him in this case about the Gambling Act.

In almost all cases related to possible corruption by Novomatic in the past, the focus was mostly on one of three issues. In addition to the online casino license in Austria, this also affected the good old lottery, for example. This is the way in Austria that the powerful concession, with which so-called VLT’s, networked gaming machines, can be set up, which outweigh any ban on “small gambling”. Around the then scandal surrounding Tal Silberstein, the campaign advisor to SPÖ Chancellor Christian Kern, an interesting, then suspected connection to Novomatic boiled up.

Novomatic always seemed to be very interested in the lottery 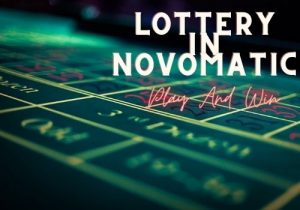 For some years now, slot machines have been banned in some federal states and only so-called VLT’s can be installed with federal licenses in these regions. With Vienna, this also affects one of the most important cities in the country. An article by Addendum suggests that as early as 2014 Novomatic, together with Tal Silberstein, might have tried to get the lucrative business with VLT’s from CASAG. Novia Technologies B.V. from the Netherlands, Casinos Austria should finally exhaust and operate the maximum number of video lottery terminals and, in return, leave 15 percent of the net income to CASAG. The remaining 85 percent would have gone into Novia’s pocket.

Interestingly, not only Tal Silberstein, who tried to enter the lottery business as Chancellor Advisor, was involved in the Novia company, but also ex-Chancellor Alfred Gusenbauer from the SPÖ. He even founded it himself. Together with Benny Steinmetz, all three negotiated with the then CEO of CASAG, Karl Stoss, who later turned down the offer. Despite the close connection to Alfred Gusenbauer, who worked as a consultant for Novomatic for a long time and was on the board of Löwen Entertainment, the Novoline slot machine denied corruption or any other involvement in this story. The fact that two former managers of the group were also involved in Novia did not change the opinion.

Due to Karl Stoss’ rejection of the deal, Tal Silberstein finally sued CASAG’s Austrian lotteries. The story of the attempted entry boiled up in the wake of Tal Silberstein and Beny Steinmetz’s arrest in Israel. Due to an investigation into corruption in Romania, Novomatic also had to fight such accusations in the country, there was a warrant here against Silberstein.